Parcel F is a testament that the commitment and perseverance of a cohesive project management team can result in a remarkable outcome.

Parcel F is the first Malaysian government project to implement Building Information Modelling (BIM) from design to facilities management. Construction works began in 2016 when BIM adoption was shallow and deemed not favourable by the construction industry players. This presented several formidable challenges for KLCC Projeks Sdn Bhd, the Project Management Consultant (PMC). Still, in spite of the project’s complexities, Parcel F was completed on time with outstanding outcomes.

“Parcel F is truly an ambitious project,” recalls Zaidatul Ahmad Zubel, General Manager for the Business & Technical Services Division, KLCC Projeks. From the get-go, it was designed and built to achieve stringent standards such as the Green Building Index (GBI) Gold rating, CIDB Quality Assessment System in Construction (QLASSIC) with a minimum score of 78% and Industrialised Building System (IBS) with a minimum score of 70%.

BIM was always in the picture because since 2011, there was an official directive from the Government to implement BIM up to Level of Development (LOD) 300, which is the Design & Development phase, for major projects.

“The Client, Putrajaya Bina Sdn Bhd made a bold decision to go a step further by implementing BIM up to LOD 500- Facilities Management,” said Zaidatul.

“This decision augured and resonated well with KLCC Projeks as we are no stranger in embracing innovation, technology and digitalisation in large-scale project management. However, implementing BIM up to LOD 500 presented a new challenge for us, and one that we were eager to take on.”

Where Traditional Meets BIM Parcel F’s overall architectural concept is based on the analogy of the traditional songket where different threads are intricately woven together to produce a beautiful and cohesive piece. Parcel F is designed as a series of layers, and building forms and employs the use of a variety of materials, colours and textures to create a true masterpiece.

Sprawled over 34 acres of land in Precinct 1 Putrajaya with a Gross Floor Area (GFA) of 223,293 square meters, the 10-block office complex comprises 9 office towers (ranging from 8 to 13 storeys), a shared 4-storey facilities building, a 3-storey podium and over 2,800 car park bays.

“BIM made perfect sense for this project due to the complexity of the design, the interlinking of the utility services between one block to another and to ease the coordination works between all trades during the design and construction stage as well as the management of the maintenance works and building assets after completion,” Zaidatul explained. 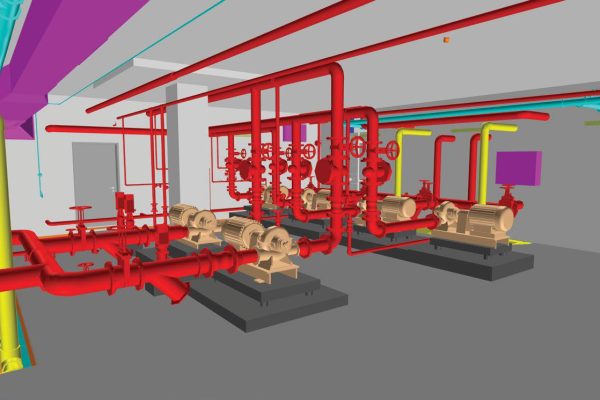 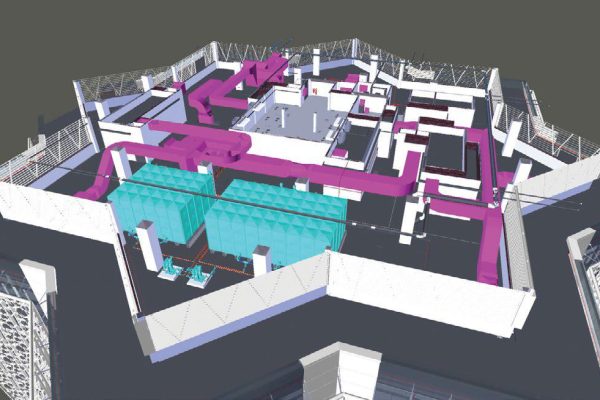 One of the BIM models of Parcel F

The BIM system was adopted in the development and management of the building design system through the use of three-dimensional (3D) images and smart design information. As Parcel F was under a Design & Build contract, the contractor, Sunway Construction Sdn. Bhd. was required to convert all Contract Drawings to 3D models and to upgrade the models with a detailed design based on their in-house consultants’ design.

Subsequently, they were expected to conduct Coordination and Clash Analysis Workshops, BIM Field Verification (BFV) sessions and produce the BIM as-built model together with the in-house and checker consultants.

At the same time, a series of Need Analysis and User Requirement Studies were conducted with the client’s Facility Management (FM) team to collate all required FM and asset information for the FM operations. All consultants, be they in-House or checker consultants, where required to be involved in all the BIM processes and works.

BIM made perfect sense for this project due to the complexity of the design, the interlinking of the utility services between one block to another and to ease the of coordination works between all trades.

Construction works began on 24 May 2016 and Parcel F received the Certificate of Acceptance on 25 November 2019. The migration of over 5,800 staff to the new building commenced on 6 January 2020.

“Thanks to BIM, we successfully completed this large project on-time. This is quite a feat as large projects are prone to delays and cost overrun,” said Zaidatul. The BIM system was adopted in the development and management of the building design system through the use of three dimensional (3D) images and smart design information.

“About 90% of the design discrepancies and disputes were resolved and finalised before construction. This has greatly minimised the rectification and double handling works and expedited the progress.”

Parcel F received the GBI – Provisional DA Gold certification as a testament to its the efficiency of resource use.

In short, the advantages of BIM the team experienced include:

All 10 blocks of Parcel F were also GBI

– Provisional DA Gold certified simultaneously and will receive the Completion & Verification Assessment (CVA) when it has 50% occupancy or a year after migration, whichever comes later.

Parcel F’s overall architectural concept is inspired by the traditional songket
where different threads are intricately woven together to form a beautiful and cohesive piece.

KLCC Projeks began their foray into BIM in 2013. “Before Parcel F, we implemented BIM in one of our projects but did not see much success,” Zaidatul recalled. “What made Parcel F so successful was the commitment of all involved to see it through to completion,” Indeed, BIM is not a model, but rather a process. As such, the people in the project are the determining factor in making the process run smoothly and efficiently.

According to Zaidatul, most of the challenges were encountered in the earlier stages of implementation, as there was a lot of confusion and misconceptions about BIM. There was also resistance to adopting BIM as it required changing the normal ways of working. “People, by nature, are typically resistant to change,” Zaidatul commented ruefully.

Nevertheless, the KLCC Projeks project management team were committed to seeing this through and filling in the gaps as best as they could. They attended numerous BIM training sessions, conferences and workshops locally and abroad to learn from and share their experiences with other BIM practitioners. With the knowledge and experience gained, KLCC Projeks was able to craft the required BIM Scope of Works and Specifications for the Parcel F Project.

“Another challenge encountered was having no project reference. As such, there were many trial exercises to ascertain the correct processes. Finally, after three months of trial and error, the correct work processes were developed,” she explained.

It was only after the sixth month that the BIM implementation managed to take off to a flying start. “After much perseverance and dedication, we finally saw positive tangible outcomes, such as better collaboration and communication amongst team players, preconstruction project visualisation, improved coordination and clash detection, reduced cost and mitigated risk,” she said.

“I would like to extend my greatest appreciation to our client Putrajaya Bina Sdn Bhd, my superiors in KLCC Projeks, the Project Management Team, the contractor Sunway Construction, consultants and everyone who has contributed to making a virtual Parcel F into a reality,” said Zaidatul. “It would not have been possible without all of them.”

The lessons learned from Parcel F have since been used as a reference for future KLCC Projeks’ BIM projects. KLCC Projeks is currently managing six high-rise projects using BIM. These projects are located in the KLCC Precinct areas and Putrajaya.

“To date, we have trained 174 employees, which is about 57% of our total workforce, on critical training programs, such as BIM Revit for Architecture, C&S and M&E, BIM Naviswork for 3D Clash Analysis, BIM Naviswork for 4D Project Planning and BIM Cubicost 5D Cost (for Quantity Surveyors).”

Significantly, KLCC Projeks has developed its own BIM Standard Operating Procedures (SOP), which is an important guideline for them to project-manage BIM projects effectively and efficiently. “With the limited availability of guidelines customised for the Malaysian landscape, KLCC Projeks has been referred to by the construction industry players for

knowledge sharing on project management experience in BIM,” Zaidatul said. To that end, several higher learning institutions have recently approached KLCC Projeks for collaboration in the area of BIM research and development.

Zaidatul heartily recommends BIM for all types of projects. She believes that the higher the BIM adoption rate, the more accessible it becomes to all construction players, which in turn will benefit them greatly.

“The construction industry needs to be fast in embracing technology and digitalisation as new construction projects have continually pushed the boundaries of design to meet increasingly ambitious demands. BIM is the obvious solution to remain relevant,” she emphasised.

She is pleased to note that most of the big and complex projects today have already adopted BIM. In fact, many consultants and contractors are in the process of enhancing and upgrading their company’s BIM knowledge and capability.

“Universities are also currently focusing on BIM and how it can be applied effectively in the construction industry. BIM is one of the subjects in the course modules,” she said approvingly.

“BIM plays a vital role in driving Malaysia’s construction industry and will continue to shape the built world. Therefore, industry players should be ready to embrace Construction 4.0 which is expected to be widely used in Malaysia by 2025.”

A collage of Parcel F

FREE PHYSICAL SEMINAR: MAXIMIZING COLLABORATION AND COMMUNICATION WITH BIM. E-CERT AND CCD POINTS WILL BE PROVIDED

FREE PHYSICAL SEMINAR: MAXIMIZING COLLABORATION AND COMMUNICATION WITH BIM. E-CERT AND CCD POINTS WILL BE PROVIDED

Not a member yet? Register now

Are you a member? Login now